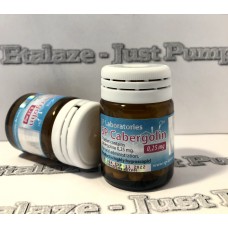 SP Cabergolin is a very powerful dopamine agonist. It acts on the dopamine receptors in the hypothalamus to inhibit prolactin production in the pituitary gland.
Bodybuilders use Cabergoline when they use one or more compounds that increase the level of prolactin in the body. Excess prolactin can cause serious side effects, such as gynecomastia. In addition, the peak of prolactin can significantly reduce your libido.
Many bodybuilders who take this product also report improved sleep due to its dopamine action. This allows you to have a deeper sleep. The recommended dosage of Cabergoline is 0.25 mg twice a week, and the dose can be increased from 0.25 mg twice a week to a dose of 1 mg twice a week.
This drug allows you to almost completely eliminate the main side effects of steroids such as Decanoate and Trenbolone. One of the effects caused by a decrease in the concentration of prolactin is a decrease in fluid retention in the tissues, which gives an increase in leaner muscle mass.
Bodybuilding applications
Experience has shown that the optimal regimen of cabergoline use to reduce prolactin is as follows:
– During the course of progestin anabolic steroids (nandrolone, trenbolone): 0.25 mg (whole or 1/2 tab) every 7-21 days, starting from the third or fourth week of the course, when the concentration of ACC approaches the maximum. The optimal dose and frequency of administration is selected under the control of prolactin level analyzes, since the effect of the drug is different and depends on the individual characteristics of the organism.
– With an increase in the level of prolactin above the permissible frequency of administration increases: 0.25 mg, every 4 days. Control analysis of prolactin is desirable to perform after two doses, followed by correction of the scheme. The drug is taken both with food and on an empty stomach.
DESCRIPTION
CABERGOLINE Tablets contain cabergoline, a dopamine receptor agonist. Cabergoline is a white powder soluble in ethyl alcohol, chloroform, and insoluble in water.
Cabergoline Tablets, for oral administration, contain 0.25 mg of cabergoline. Inactive ingredients consist of leucine, USP, and lactose, NF.
CLINICAL PHARMACOLOGY
Mechanism of Action: The secretion of prolactin by the anterior pituitary is mainly under hypothalamic inhibitory control, likely exerted through release of dopamine by tuberoinfundibular neurons. Cabergoline is a long-acting dopamine receptor agonist with a high affinity for D2 receptors. Results of in vitro studies demonstrate that cabergoline exerts a direct inhibitory effect on the secretion of prolactin pituitary lactotrophs.
For the treatment of hyperprolactinemic disorders, either idiopathic or due to prolactinoma (prolactin-secreting adenomas). May also be used to manage symptoms of Parkinson’s Syndrome as monotherapy during initial symptomatic management or as an adjunct to levodopa therapy during advanced stages of disease.
Off-label
It has at times been used as an adjunct to antidepressants as there is some evidence that it counteracts certain side effects of those drugs, such as reduced libido and anorgasmia. It also has been suggested that it has a possible recreational use in reducing or eliminating the male refractory period, thereby allowing men to experience multiple ejaculatory orgasms in rapid succession, and at least two scientific studies support those speculations.
Additionally, a systematic review and meta-analysis concluded that prophylactic treatment with cabergoline reduces the incidence, but not the severity, of ovarian hyperstimulation syndrome (OHSS), without compromising pregnancy outcomes, in females undergoing stimulated cycles of in vitro fertilization.
Contraindications and precautions
Hypersensitivity to ergot derivatives.
Pediatric patients (no clinical experience).
Severely impaired liver function or cholestasis.
Co-medication with drugs metabolized mainly by CYP P450 such as erythromycin and ketoconazole, because increased plasma levels of cabergoline may result (although cabergoline undergoes minimal CYP450 metabolism).
Cautions
Severe cardiovascular disease, Raynaud’s disease, gastroduodenal ulcers, active gastrointestinal bleeding, hypotension.
SIDE EFFECTS
A study on 200 patients with Parkinson’s disease using high dosages of cabergoline (0.5 mg each day) reports the following side effects:
Digestive system (most often): nausea, constipation, dry mouth, dyspepsia;
Nervous system: insomnia, dizziness, depression, distortion of consciousness;
Cardiovascular system: blood pressure reduction, peripheral edema, rhythm disturbance, valve damage, pericarditis;
Immune system:
uncommon – hypersensitivity reaction, skin rash;
Respiratory system:
common – shortness of breath;
uncommon – pleural effusion, fibrosis of the lung, epistaxis. 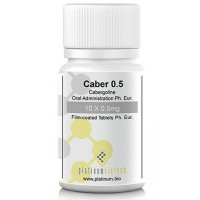 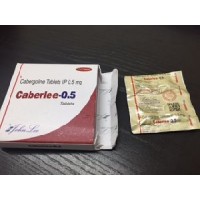 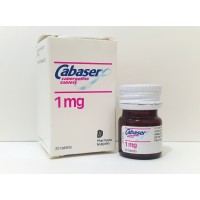