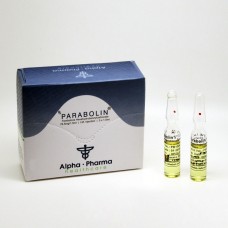 Trenbolone hexahydrobenzylcarbonate (brand name Parabolin, Parabolan, Hexabolan), or trenbolone cyclohexylmethylcarbonate, also known as estra-4,9,11-trien-17β-ol-3-one 17β-cyclohexylmethylcarbonate, is a synthetic anabolic-androgenic steroid (AAS) of the 19-nortestosterone group and an androgen ester – specifically, the 17β-hexahydrobenzylcarbonate ester of trenbolone – which was marketed in France for human clinical use but has since been discontinued. It was introduced in France in 1980 and discontinued (voluntarily) by its manufacturer in 1997. It acts as a long-acting prodrug of trenbolone when administered via intramuscular injection.

Trenbolone Hexahydrobenzylcarbonate was developed into medicine by Negma Laboratories in France, which sold the drug under the Parabolan trade name. It was also sold for a period of time as Hexabolan, a name that reffered to the unusual ester is possesses. Trenbolone Hexahydrobenzylcarbonate is the only form of trenbolone ever produced as a medicine for human consumption. The most notable appearance of trenbolone comes as trenbolone acetate, which is used widely and exclusively in veterinary medicine.

Parabolan was prescribed in France as a protein-sparing anabolic agent in cases of lean body mass wasting and malnutrition, as well as to combat some forms of osteoporosis. Its prescribing guidelines included recommendations for the treatment of androgenic-sensitive populations, such as women and the elderly. Owing to its moderate androgenic properties, however, the drug was contraindicated in children, especially young females.

Parabolan remained on the French market for a very long time, although it was finally voluntarily discontinued by Negma Laboratories in 1997.

Parabolin is known under the names

Parabolin is indicated in treatment of severe muscular dystrophy and severe unrelated muscular catabolism as well as acute growth failure. 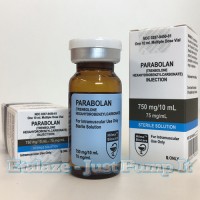