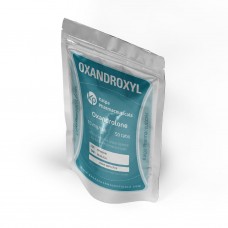 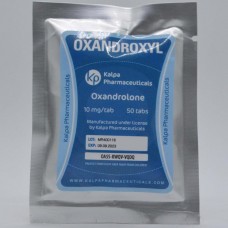 Oxandroxyl (Oxandrolone) 50 tabs (10 mg/tab) by Kalpa
Oxandroxyl (Oxandrolone) is an oral anabolic steroid derived from dihydrotestosterone. It was designed to have a very strong separation of anabolic and androgenic effect, and no significant estrogenic or progestational activity. Oxandrolone is noted for being quite mild as far as oral steroids are concerned, well tailored for the promotion of strength and quality muscle tissue gains without significant side effects. Milligram for milligram it displays as much as six times the anabolic activity of testosterone in assays, with significantly less androgenicity. This drug is a favorite of dieting bodybuilders and competitive athletes in speed/anaerobic performance sports, where its tendency for pure tissue gain (without fat or water retention) fits well with the desired goals.
Studies have shown that taking an oral anabolic steroid with food may decrease its bio availability.This is caused by the fat-soluble nature of steroid hormones, which can allow some of the drug to dissolve with undigested dietary fat, reducing its absorption from the gastrointestinal tract. For maximum utilization, this steroid should be taken on an empty stomach.
The original prescribing guidelines for Anavar called for a daily dosage of between 2.5 mg and 20 mg per day (5-10 mg being most common). This was usually recommended for a period of two to four weeks, but occasionally it was taken for as long as three months. The dosing guidelines recommended with the current U.S. production form of the drug also call for between 2.5 and 20 mg of drug per day, taken in intermittent cycles of 2 to 4 weeks. The usual dosage for physique- or performance-enhancing purposes is in the range of 15-25 mg per day, taken for 6 to 8 weeks. These protocols are not far removed from those of normal therapeutic situations. Oxandrolone is often combined with other steroids for a more dramatic result. For example, while bulking one might opt to add in 200-400 mg of a testosterone ester (cypionate, enanthate, or propionate) per week. The result should be a considerable gain in new muscle mass, with a more comfortable level of water and fat retention than if taking a higher dose of testosterone alone. For dieting phases, one might alternately combine oxandrolone with a non-aromatizing steroid such as 150 mg per week of a trenbolone ester or 200-300 mg of Primoxyl 100 (methenolone enanthate). Such stacks are highly favored for increasing definition and muscularity. An in-between (lean mass gain) might be to add in 200-400 mg of a low estrogenic compound like Nadroxyl 250 (nandrolone decanoate) or Boldaxyl 300 (boldenone undecylenate).
The original prescribing guidelines for Anavar did not offer separate dosing recommendations for women, although it was indicated that women who were pregnant, or may become pregnant, should not use the drug. The current guidelines for Oxandroxyl also do not make special dosing recommendations for women. Women who fear the masculinizing effects of many steroids would be quite comfortable using this drug, as these properties are very rarely seen with low doses. For physique- or performance-enhancing purposes, a daily dosage of 5-10 mg should illicit considerable growth without the noticeable androgenic side effects of other drugs. This would be taken for no longer than 4-6 weeks. Eager females may wish to add another mild anabolic such as Stanoxyl, Primoxyl 100 or Nandroxyl 250. When combined with such anabolics, the user should notice faster, more pronounced muscle-building effects, but it may also increase the likelihood of seeing androgenic side effects (or hepatotoxicity in the case of Winstrol). 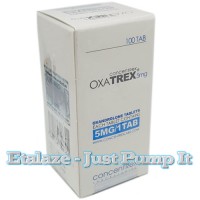 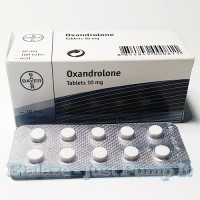 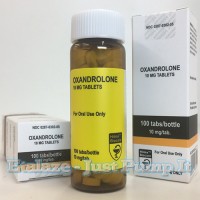