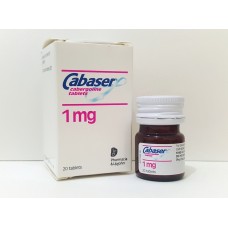 The effect is prompt (within 3 hours of administration) and persistent (up to 7-28 days). The PRL-lowering effect is dose-related both in terms of degree of effect and duration of action.

Cabaser is used to treat the symptoms of Parkinson’s disease. The tablets contain the active ingredient Cabergoline which acts in a similar way to a chemical in the body called dopamine. Patients with Parkinson’s disease do not have enough of this chemical.

The pharmacokinetic and metabolic profiles of Cabaser have been studied in healthy volunteers of both sexes, in female hyperprolactinemic patients and in parkinsonian patients. After oral administration of the labelled compound, radioactivity was rapidly absorbed from the gastrointestinal tract as the peak of radioactivity in plasma was between 0.5 and 4 hours. Ten days after administration about 18/20% and 55/72% of the radioactive dose (3H-cabergoline/14C-cabergoline) was recovered in urine and faeces, respectively.

The low urinary excretion of unchanged Cabaser has been confirmed also in studies with non-radioactive product. The elimination half-life of Cabaser, estimated from urinary excretion rates, is long (63-68 hours in healthy volunteers, 79-115 hours in hyperprolactinemic patients).

Food does not appear to affect absorption and disposition of Cabaser. Since the tolerability of dopaminergic agents is improved when administered with food, it is recommended that Cabaser be taken with meals.

If treatment with a dopamine agonist is being considered, cabergoline is indicated as second line therapy in patients who are intolerant or fail treatment with a non-ergot compound, as monotherapy, or as adjunctive treatment to levodopa plus dopa-decarboxylase inhibitor, in the management of the signs and symptoms of Parkinson's disease.

As expected for dopamine agonists, dose response for both efficacy and side effects appears to be linked to individual sensitivity. Optimization of dose should be obtained through slow initial dose titration, from starting doses of 1 mg daily. The dosage of concurrent levodopa may be gradually decreased, while the dosage of Cabaser is increased, until the optimum balance is determined. In view of the long half-life of the compound, increments of the daily dose of 0.5-1 mg should be done at weekly (initial weeks) or bi-weekly intervals, up to optimal doses.

The recommended therapeutic dosage is 2 to 3 mg/day for patients with signs and symptoms of Parkinson's disease. Cabaser should be given as a single daily dose.

The safety and efficacy of Cabaser have not been investigated in children as Parkinson's disease does not affect this population.

Hypersensitivity to Cabaser, any excipient of the product, or any ergot alkaloid.

For long-term treatment: Evidence of cardiac valvulopathy as determined by pre-treatment echocardiography.

As with other ergot derivatives, Cabaser should be given with caution to patients with severe cardiovascular disease, Raynaud's syndrome, peptic ulcer or gastrointestinal bleeding, or with a history of serious, particularly psychotic, mental disorders.

Patients with rare hereditary problems of galactose intolerance, the Lapp lactase deficiency or glucose-galactose malabsorption should not take this medicine.

In a twelve year observational study on pregnancy outcomes following cabergoline therapy, information is available on 256 pregnancies. Seventeen of these 256 pregnancies (6.6%) eventuated in major congenital malformations or abortion. Information is available on 23/258 infants who had a total of 27 neonatal abnormalities, both major and minor. Musculoskeletal malformations were the most common neonatal abnormality (10), followed by cardio-pulmonary abnormalities (5). There is no information on perinatal disorders or long-term development of infants exposed to intra-uterine cabergoline. Based on recent published literature, the prevalence of major congenital malformations in the general population has been reported to be 6.9% or greater. Rates of congenital abnormality vary between different populations. It is not possible to accurately determine if there is an increased risk as no control group was included.

Storage temperature:  keep in room temperature (15-25 C) away from sunlight and moisture. 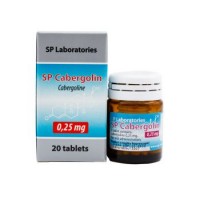 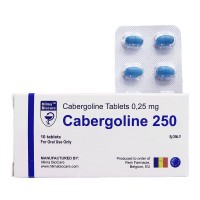